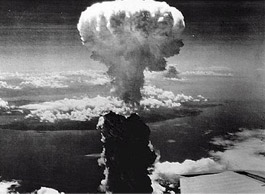 The decision of dropping nuclear bombs on Nagasaki and Hiroshima ushered the Earth into the nuclear age. With the appearing of atomic weapons, mankind drives towards annihilation. The precept that leads the nuclear weapon nations, is the theory of disincentive, the impression that no state would attack another that has nuclear weapons. With the imposing numbers of stocked nuclear weapons and the possibility of nuclear development, will humankind be able to control the nuclear age? Despite all the precautions taken, the nuclear age remains an unacceptable danger to humanity. The first nuclear bomb was tested near New Mexico in July 1945. Later on, the "Atoms for Peace" Program was launched by President Eisenhower. In November 2000 nuclear power was recognized as unnecessary and dangerous technology. Statistics show that up to 1,300 million people have been mutilated, diseased or killed by nuclear power since it's inception. The risks of nuclear energy are long-lasting, inherent and real.